The menus at the Fogo Island Inn frame the main ingredients in a bit of a tongue in cheek way.

By the time this night was over, we’d had both the tongue and the cheek and were totally sated by the creations of the visiting chefs and Chef Murray McDonald.

Being in only the second year of operation, this was the second annual Thanksgiving Chefs weekend. Last year, top chefs from Newfoundland and Labrador each created unique courses for a 7 Course for 7 Season’s dinner. This year, vising chefs from upalong (Toronto and other areas of Ontario often called Toronto by Newfoundlanders) worked together to plan and create each course in very unique way.

Egos were checked at the door and in a three hour joint planning session, starting from the larder, a feast was designed by chefs Ryan Crawford, Jamie Kennedy, Alex Moritz, Chris McDonald and Murray McDonald.

In addition to the six course menu, a Swallies menu was paired as an option. We were at the fun table and spent the evening critiquing Swallies and trying to get the best food pictures of the evening.

Mid afternoon, all chefs participated in the presentation of the menu to the front of the house staff. Service details are meticulously thought out at the Inn, part of the overall success of the Inn experience. There are many reasons they are getting return visitors and rave reviews.
With open seating, we paired up with two ladies from Toronto (really, they said that was where they were from) and finding a table for six available, they invited a German gentleman who is currently a resident of Bahrain.  Melanie Coates, marketer extraordinaire for the Fogo Island Inn joined us to make us the table complete. As we got to know each other, Chef Murray McDonald arrived and welcomed guests and visiting chefs, giving them each an opportunity to speak to the eager diners.

Each chef was gracious and appreciative of the experience of collaboration rather than featuring signature dishes by individuals. It certainly seems like this was a very open group with each idea measured and valued.

Our first course was Seafood on the Rocks.

A large chunk of real iceberg ice was surrounded by caribou moss and  beach rocks on a large silver platter. House made shrimp chips ringed the berg and a sea cucumber salad was served on spoons with the handles discretely hidden in the landscaping. Washed up on the ice was a selection of Fogo Island seafood. Whole shrimp, crab, scallops and salt fish was generously displayed on various surfaces of the iceberg ice and garnished with oyster leaves. Sea urchin roe was used in an aioli which was served in the sea urchin shell. A polite group of strangers quickly gelled into a team as we shared up the various tastes and rotated the platter until we had each eaten to our content and then made sure we didn’t  miss anything. 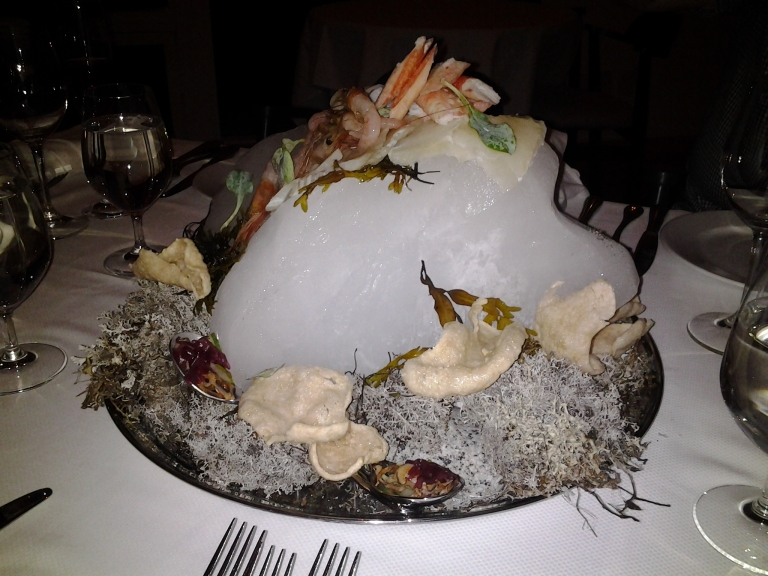 Rather than detailing each course, this link to my Food app shows the full experience.  I find this is a great way for my foodie friends do just cut to the chase.  Just click this link and enjoy pictures and descriptions of each course.

Pastry Chef Kara explains her Berries in a Bog dish. Her desserts are beyond words, using traditional themes and local ingredients.

It’s hard to imagine that we woke up looking forward to eating again but there’s just something about the salt air; even if you are just viewing it through a floor to ceiling window from under a homemade quilt.

I woke just in time to miss a yoga class offered Beverly Hotchkiss, wife of Chef Ryan Crawford from Gastrohomestead.  I’m sure there is a lot of meditation and reflection being done as they prepare to open a restaurant soon in the Niagra on the Lake area of Ontario. In addition to raising their own animals, having gardens and farm to table philosophy, they are also sourcing local grapes to make their own wines. Maybe we’ll get to continue our conversation in Ontario someday Bev. Maybe I’ll even meet you on the mat!

Wooden tool boxes with carafes of tea or coffee are delivered early and left outside each room. More recently dubbed a ‘tackle box’ it is easy to tackle the Flat Earth Coffee, still piping hot while lounging in bed. Pastries or scones are added hot to the boxes so it’s a good idea to get them early while they are still warm. The island made boxes are available for purchase but without the amazing coffee and food preparation and service, it just doesn’t seem to work as well as they do it at the Inn. 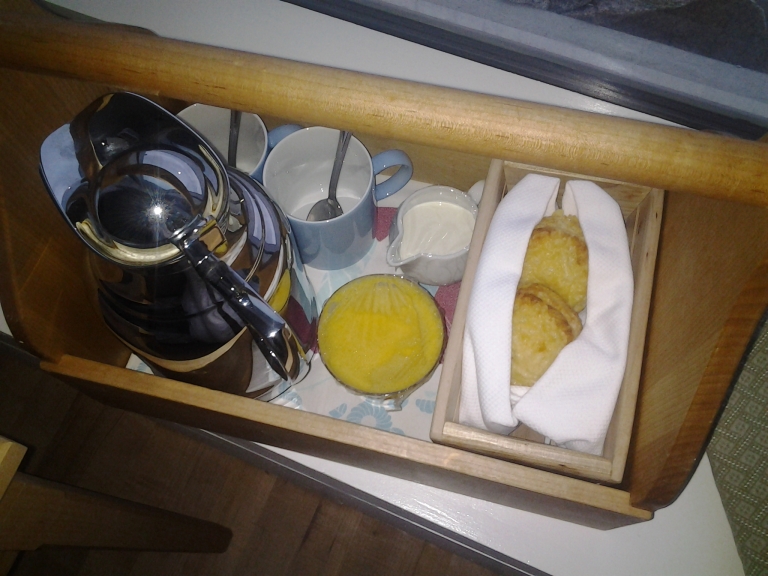 After breakfast, the chefs participated in a chef’s talk in the meeting room above the dining room.

Besides sharing their own impressions of the over all experience of the weekend, topics such as farm to table concept were discussed. Chef Chris McDonald described the Inn experiences as a “sense of somewhereness.” He said Chef MurrayMacDonald’s food tells the story of where you are when you come to the Fogo Island Inn. Urban chefs, he explained, transport you “elsewhere”. He described his restaurant Cava in Toronto as a place where he tends to “shout the Spanish influence”.

He also spoke of the “soul of what you are doing” in restaurants and how important elements such as music, wine and authentic detail are to the integrity of the experience.

Zita Cobb, Innkeeper and innovator asked a number of questions regarding distribution and corporate control of food sources. Very much a promoter of local product she reminds us that local producers can’t access shelf space in stores due to controls put in by corporate interests. The chefs are all passionate about serving the best product but also see all sides of issues such as availability of product and efficiency of the food distribution systems. The Third Plate a book by Dan Barber was referenced several times by Chef Alex Molitz as a text that questions the methods and politics of the farm to table philosophy and a good source to further understand the topic.

The chefs talk was followed by lunch and then a lazy afternoon in Room 13. I spent the afternoon entertaining friends and reading and relaxing.  We moved downstairs for refreshments and saw the dining room stayed busy as guests came and went between Inn, excursions and the Partridgeberry Harvest Festival.

Aiden Foley provided dinner music as people started gathering again in the dining room. I couldn’t resist a picture framed by the fire box of the dining room fireplace. Pretend I had the talents and camera of Paddy Barry. Humor me. 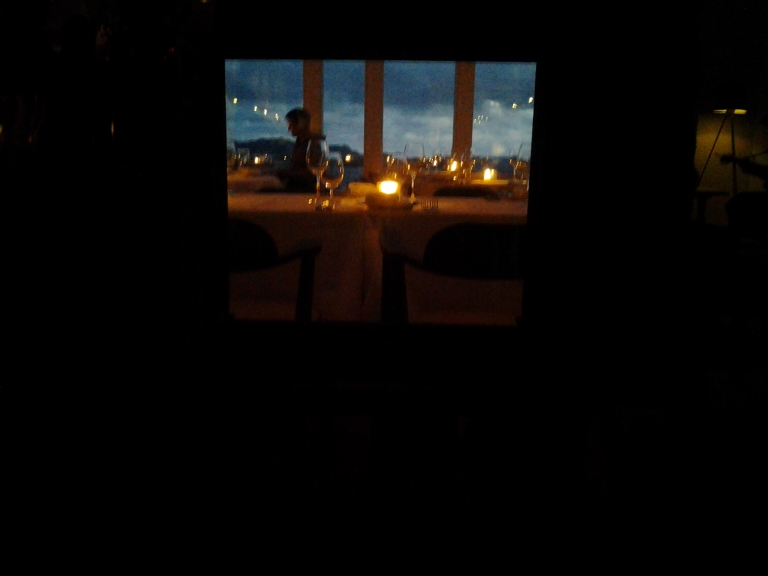 Sunday night we were treated to one of the fall menus. Dependant on seasonal ingredients, the menu changes often. I ordered two dishes I’d never tried before, the Fungi and a local pork plate.

As I waited for dinner, one of the Inn guests entertained the community with a beautiful fireworks display. Arriving with his own fireworks and a drone for taking pictures, he was quickly dubbed a `Party in a truck`.

Here is one of his party tricks. Drone footage by Wildheight Films

Our meal began with an amuse-bouche of pan seared scallop with oyster leaf. 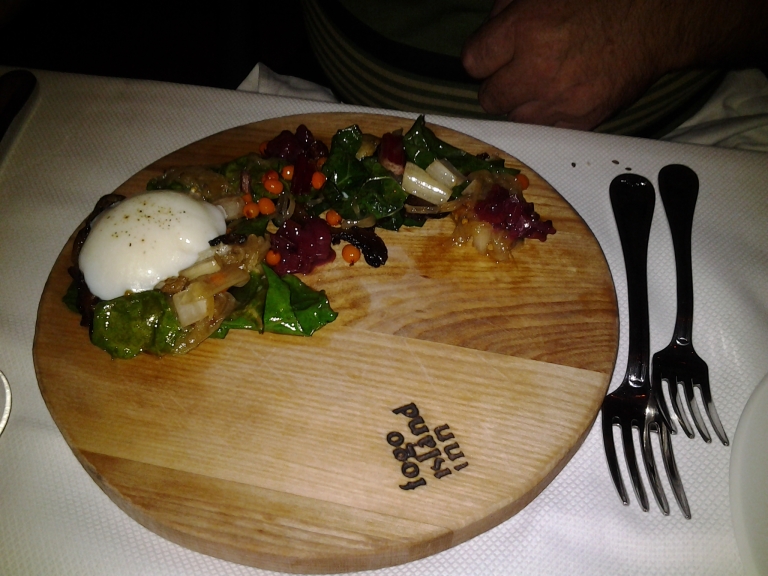 Leo went for the Gloves and Vamps appetizer featuring Salt Water Lamb. Salt Water Lamb is local lamb that is left on small islands to graze for the summer. The use of island eliminates the need for fences as they are transported by small boats to and from the islands, spring and fall respectively.

The waitress explained that the Fungi was almost a mushroom soup type dish. Plated with two different kinds of local mushrooms and a crispy bread ‘thingy’ the dish is finished at the table with an mushroom velouté.

Leo’s steak was a perfect medium rare and although he offered me a bite, I know he didn’t mean it.

The local Point Leamington Pork plate was definitely the best pork dish I’ve had in a restaurant. The pork belly had a sweetness and the pulled pork in the cabbage rolls was excellent.

Although we were very tempted, we were too full to even consider splitting a dessert. We admired those served at the next tables but just couldn’t do it after such hearty portions and two previous meals in the dining room that day. We spent the rest of the evening in the Inn’s theatre, viewing the recently released The Grand Seduction, filmed in the Tickle Cove and Trinity areas of Newfoundland.

It was a great way to finish an amazing evening.

That just made breakfast that more delicious. Leo went for the beans and toutons. 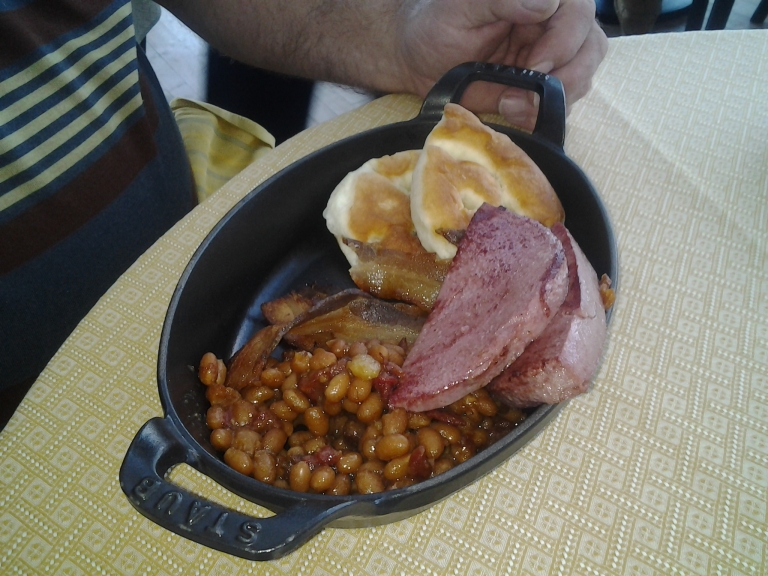 And then he went for a nap.

We had requested a late check out which they were able to accommodate.  With our car on the other side of the ferry ride, we only had an hour to drive to get home. We stay as late as they`ll let us.

Separation anxiety is definitely an issue for me and my rooms at the Inn.

I took a walk down the lane to the craft guild to see if I had missed anything from the festival offerings on the weekend. The rolling hills and landscape quickly make the Inn disappear behind rocks, bushes and berries. It is so perfectly positioned to be visible and invisible within a few feet along the way.

There is a certain light on Fogo Island when the white Inn becomes a soft grey, like the rocks it sits on.

This was my first weekend seeing that but I saw it as we arrived and again, as we left. It surprised me both times.

Can`t wait to see it again. Thank  you Fogo Island Inn staff for a great weekend.