Resettlement reminds me very much of the expulsion on the French population in the 1700s. The images, stories and music have a similar lament, and often anger, over losing land, community and history due to economics and politics of the day.
On our drive from Marystown, I picked a few random communities off the main road. Red Harbour touched me. 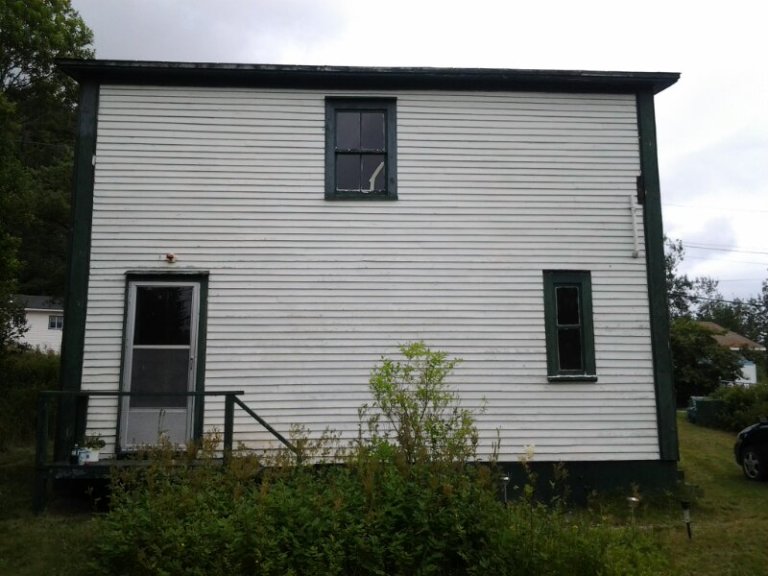 I wondered if I was on sensory overload because some of these little outports weren’t seeming as scenic as the day previous. Then I realized I was missing the salt box houses and older architecture. Most houses we were seeing were newer constructions, bungalows the same vintage as ours, or huge new “working out west” houses covered in siding and windows, many still in the works.
Then we went to Red Harbour.

Red Harbour was established in 1969 and we wondered and discussed as we drove around as to whether it was resettled. There were a number of older structures mixed with the new but I just can’t imagine how they perch them high on hills after floating them in the Atlantic.
After visiting a lovely little fishing harbour we followed the signs to a yard sale. Items were for sale in the house and in the shed. All of the treasures were well picked through by the time we arrived and even the mantle was pulled of the wall and gone because this house will be demolished on Monday.
The land will be used by a daughter who has a home on St. John’s and a trailer. The home, floated from Port Elizabeth, Davis Island, placentia Bay (link to cemetary records from 1800s) in the 1960s when the community resettled and established Red Harbour will be the 5th demolished in the past couple of years. This was a strong looking structure that won’t come down easily because it was well maintained for years.
I wish I’d known all this before I blew off the last of the yards sale items. My resettlement collection might have needed that trinket or treasure that once was part of Port Elizabeth.

2 thoughts on “Red Harbour: Established 1969 due to resettlement from Port Elizabeth”