I remember flying into Gander 25 years ago for a job interview.

Knowing I might move here, I asked for some tips of what to see. No help from the front desk guy. Hoping it was only his first day, I tried again and asked what he did on his days off.
“Hang out at the mall.”
Moved here anyway and must admit, hang out at the mall now and then.
Gander did have an art gallery, pool and theatre when I moved here, all still in place. During my first year teaching here  I saw my first ballet, opera (Tales of Hoffman) and classical music experience by buying season tickets to the now named, Joseph R. Smallwood Arts and Culture Centre. Also saw Murray McLaughlin, and other amazing musicians performing all genres of music.

Gander also has an interesting albeit short history. Established as an airport to meet needs created by the Second World War, a community developed to support the airport.

In addition to the recent history, both the Town Hall and Museum also display artifacts and interpretation of Gander’s early history, especially that of the Newfoundland Ferry Command.

One would immediately think ferry boats but this was actually an air command of aircraft pilots who each ferried new planes across the Atlantic for use in the Second World War. Pilots would then load together into one plane, fly back across the North Atlantic and do it again, with an aircraft each. A proper visit to the museum will help one appreciate the pioneering in aviation that was taking place from Gander in the 1940s. Gander was a bustling military community with a population of  10000. Canadian, American and Newfoundland forces were represented. Newfoundland was, of course, a British colony at the time only joining Canada as a province in 1949.

Selected because of it’s topography (natural plateau), geography (inland and not subject to sea attack) and weather (ever see the fog in St. John’s) Gander’s original town site had a theatre, hospital and recreational facilities and was adjacent to the runways. There were actually warning lights on Circular Road in case an aircraft landed on the road instead of the runway!

A boardwalk outside the airport and hotels was frequented by movie stars waiting for refueling before starting a transatlantic flight or refreshing after landing. Canadian actor Gordon Pinsent saw his first movie star in Gander at the age of 14. He came here from Grand Falls on the train to work in a hotel.

The town was eventually relocated away from the airport and continues to grow and develop, quadrupling in area since I came in 1986.

The Old Town Site, a part of the 54 hectare Thomas Howe Demonstration Forest is now a forested recreational area consisting of walking trails on the still evident original paved streets. The forest has an interesting composition as it developed from the abandoned Town site and includes non native species and fruit trees. Interpretive signs indicate locations of historical sites such as barracks, houses and recreational facilities.

Passing through Gander and the Old Town Site. the former train rail bed is now part of the Newfoundland Trailway, part of the TransCanada Trail system, and used by skiers, walkes, recreational vehicles such as atvs and snowmobiles, .

Over the past quarter century, we’ve continued to make history and a few more places to hang out. The museum is a great place to hangout. You can learn about recent and past aviation history.
Gander’s recent aviation history includes the community’s response to passengers stranded on 911, the date of the attack on the World Trade Centre in New York city, and for several days after. Communities of Central Newfoundland clothed, fed and ministered to almost 7000 strangers representing most countries in the world. 38 aircraft made emergency landings in Gander. The most since the end of the Second World War.

A visitor to Gander can simply ask most people on the street or visit our Town Hall or the North Atlantic Aviation Museum to learn more about this experience. Very few people living here in 2001 were not involved in this effort to comfort and meet the needs of strangers who arrived unexpectedly and almost doubled our population for a few days.

Personally, it was a life changing experience to be needed and helpful to people in such crisis. (I have a blog post recounting some of my experience, search 911 or click on the tag cloud.)

My favorite place to hang out is my forest.

As a former chairperson of the Thomas Howe Forest Foundation, I was one of many individuals who volunteered to see this site developed and promoted.

The Thomas Howe Interpretation Site on the TransCanada Highway features walking trails with excellent forestry interpretation signs. You can chose from a short 15 minute stroll to about an hour’s walk and because the trails link one to the other you can decide as you walk or run how far you’d like to go. This is one of my favorite places to teach. 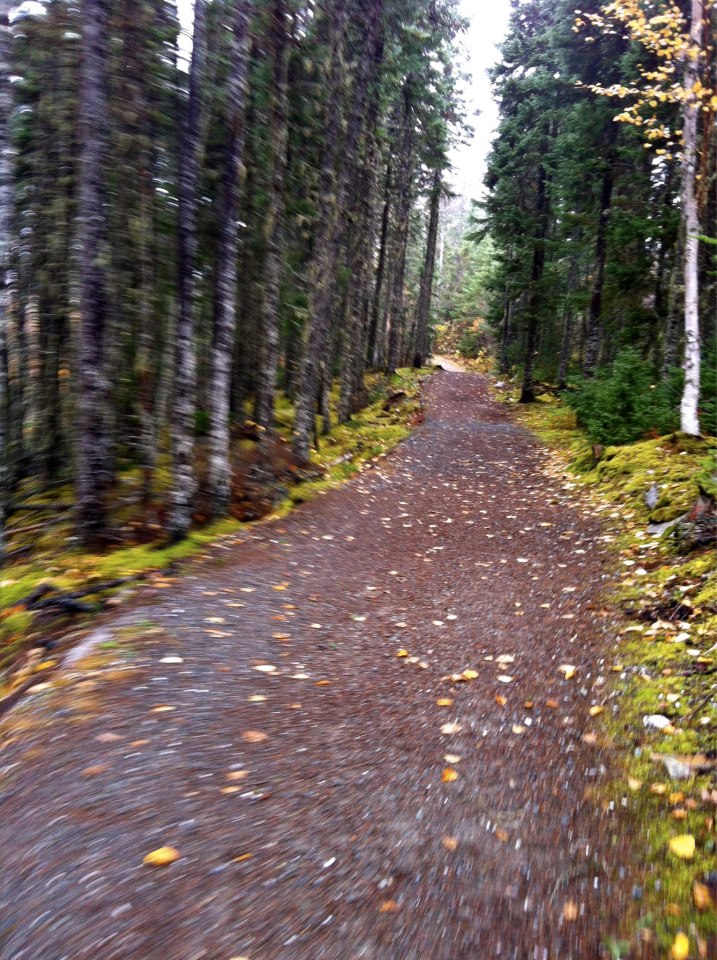 Located with an amazing view of Gander Lake, the Silent Witness Memorial is a beautiful tribute to the lost of the 101 Airborne Division from Fort Campbell, Kentucky. This most recent aviation tragedy happened  December 12, 1985, just before I came to Gander and I was there for the moving dedication a year later. This site is visited annually by family members of crash victims and school groups learning about Peace Keeping as part of Remembrance Day ceremonies. This is a crash site and has been respectfully cared for in memory of 254 victims. Photos by Paddy Barry.

This just won’t be a usual post if I also didn’t include a where to eat suggestion. My favorite place to eat is Bistro on Roe. I think they are in their 6th year of operation in Gander now and Alex and Nicole Bracci remain consistent in their use of local product and Alex’s Italian influences to create and serve great meals.

This week we tried new items, a lobster and spaghettini special and the beef and pork burger with blueberries. Both were amazing. We split an order of local mussels, had a couple of beverages and with tip had a lovely treat for less than $100. Appetizers and entrees come in a range of flavours and prices and we’ve been known to just go for mussels and a quiet evening out. Reservations aren’t required but I do recommend them as our last few visits have seen the dining room full.651-4763

I so enjoy the food at the Bistro that I celebrate my birthday each year by asking friends to join me there for dinner. It’s always a fun crowd and they even buy their own dinner. To see more reviews, check them out on Trip Advisor and you’ll get even more of me.

For homecooked, every day menu and a great breakfast (ask and pay extra for homemade toast) we like Country Kitchen in the Gander Mall……a place to hang out.

Since this post had been simmering for a while, I took a run up to the airport with my tablet when I saw an American military transport approaching low over my house. I wanted to get this draft finished and the plane would make a good shot.

The airport was once bustling and booming. Our international lounge was a marvel of architeture and design in it’s day. The Queen, a very young queen, opened it. Fidele Castro landed and visited here. Changes in technology allows overflying now, without the need to refuel.

The airport is slow these days with cheaper flights only offered by Air Canada when they get competition. Price wars quickly eliminate the competition and our options become limited again. Book early when flying here.

A small private plane, possibly Lear Jet arrived while I was at the airport and there were actually two US military flights and a huge, Russian made Antanov on the tarmac. As an emergency stop before crossing the ocean and those who are coming this way mid Atlantic, at least one of these was an unscheduled mechanical issue. 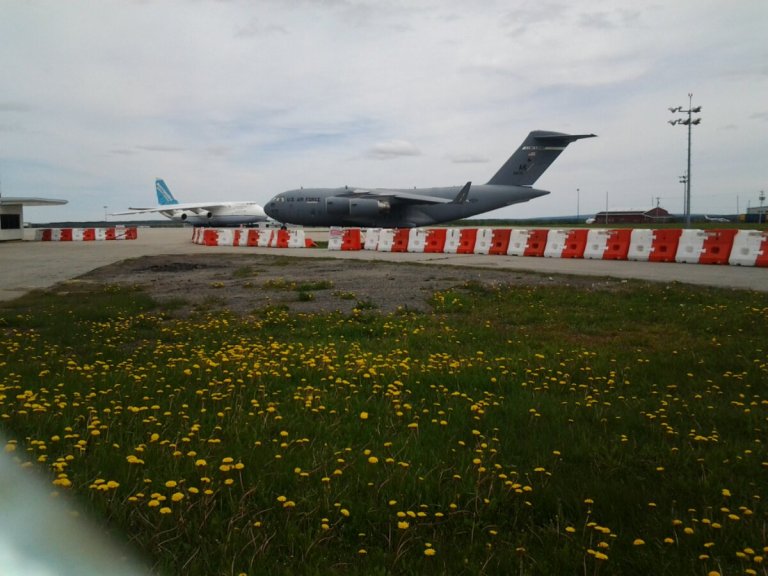 I actually had to circle the parking lot 3 times to get a spot as there was also a domestic flight with a large number of arrivals.

It was a bit like the old days and perhaps a hint of the future. Let’s hope.

Welcome to Gander. My home by choice, Crossroads of the World and a great location to day trip around Central Newfoundland.

One thought on “Gander Goods”