*** Version 2.0 after Christina Hicks emailed me some great pictures after meeting her several times as we were taking pictures that day.

Iceberg Alley is the nickname given to the area of Newfoundland most frequented by icebergs each spring. Twillingate is probably most well known but the Alley is actually the whole northern coastline of the province and can include many bays and harbours.

It starts around St. Anthony and  they meander past St. John’s.

2017 Edit: I used to use icebergfinder.com but realized it was not accurate due to some icebergs actually being so far off shore they could not be seen from shore or accessed by tour boats. I initially tried to post information to them by providing photos with locations but after a year of rejection, I started my own facebook group. Simply post current icebergs with locations or follow the group to see what others have found. It’s worked remarkably well due to a demand for accurate information and success of members seeing icebergs thanks to member posts.

Best suggestion, use a variety of sources, but of course, I now have a bias to this one. Newfoundland Iceberg Reports on Facebook because it is accessed instantly by members who see bergs all around the province rather than dependent on Monday to Friday data entry.

It’s not an Alley at all!

The first time we ‘discovered’ Grates Cove was about 15 years ago on a July 15. I remember the date, because it was the latest I’d ever seen an iceberg. The iceberg was massive and miles off but gave me a boost of energy that can’t be explained, must be experienced. In addition to the iceberg, we saw whales in Bay de Verde and several other areas of Route 70 as we descended the Baccalieu Trail.

With lots of iceberg reports on Facebook and other media, I picked Grates Cove as a destination for a Sunday drive. I even proposed we do it in the opposite direction from our traditional route so I could get the ocean on the passenger side all the way. I knew at some point, staying “stop the car” wouldn’t work so I’d be shooting pictures out at dirty window.

Following the TransCanada Highway from Gander to the Avondale turn off, we visited numerous communities and quickly realized we had miscalculated. There were way more than we expected and we were running out of time.

We didn’t have enough time to do the nooks and crannies and try various roads to get multiple angles. I spent most of the day with Leo telling me to get back in the car if I was planning to ever get to Grates Cove. Once we got to Grates Cove for a great supper feed of homemade soup and crab etouffée it was suddenly after 5 o’clock and we had a 500 km drive home!

We only counted two of the three we saw in Ochre Pit Cove. The third one was too small. I didn’t even have time to go to see the Salty Sea Cottages shown in multicolours to the right of this picture. Next time this will be a two day trip and we’ll stay there.

Before we got to the Grates Cove turn off, we knew Red Head Cove and Bay de Verde were being sacrificed on this adventure. Too many icebergs, too little time!

My pictures don’t do justice to the majesty of the day but they do represent the quantity. In many places we could see eight or ten icebergs in a panoramic view. Down the road, we might see two or three from the previous vista and more new ones. 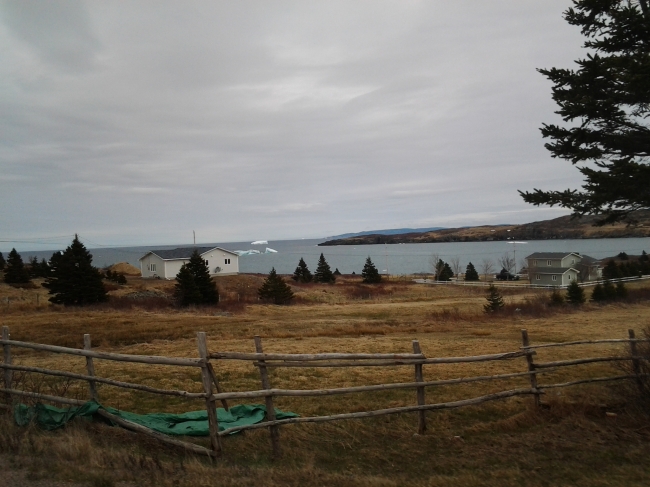 We had a great day. 1000 km, over 50 medium or large icebergs and that many small ones too. I did meet two people with telephoto lenses so am hoping they might see this post when they come across my card again and perhaps share a good shot or two.

AND CHRISTINA HICKS DID! Thanks again.

Remembering, that trip years ago as we drove home in the dark,   I remember we got home at midnight that time…….Oops.

Apparently this day trip is really a two day trip.

And a couple of video treats.

Somewhere between here and Grates Cove on Route 70 North