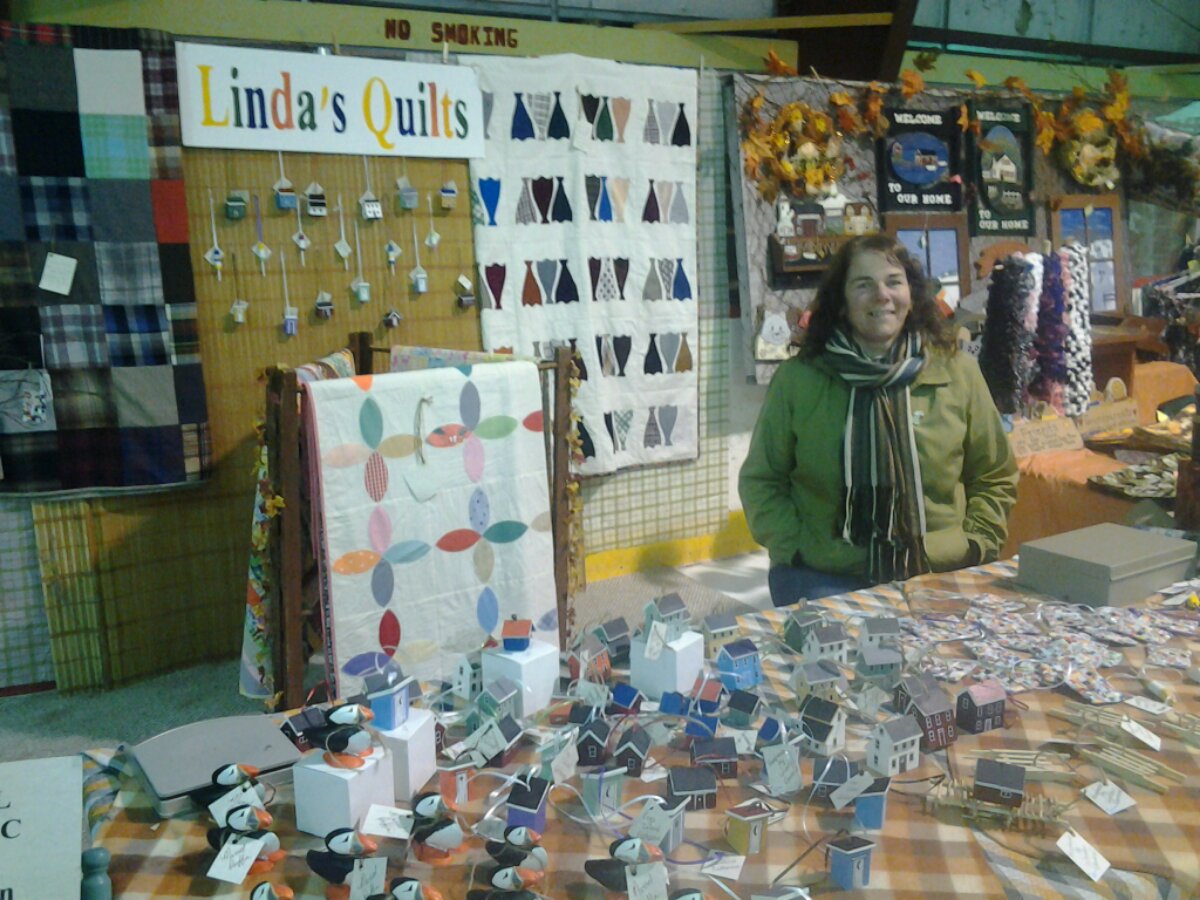 I can’t imagine how many more reasons I can offer to visit Fogo Island but this was our most recent excuse.

We’ve been hearing about the Partridgeberry Festival since it began 6 years ago and what better excuse to spend a long weekend at the Fogo Island Inn?

According to Executive Chef Murray McDonald from the Fogo Island Inn, there are twenty different edible berry species growing on Fogo and Change Islands. Not all are great tasting but the partridgeberry sure is.

A tart red berry that grows low on the ground, the partridgeberry is harvested after the first frost. As a result of the cold eviction of resident insects who stay only during the warm weather occurs. Requiring the frost for a proper harvest, the partridgeberry picking season follows the blueberry season. Tart (unsweetened) it can be used like a cranberry; sweetened as a jam, pie filling or anywhere blueberries might be used.

The festival had a bake off and recipe component in it’s origins and I’m not sure if that is still an element. We visited on Saturday so that may have been part of the Sunday festivities. The harvest theme is still prominent with competitions for the best vegetables grown by local farmers. With an Agricultural Co-operative established in recent years, there are a number of gardeners who participate in a weekly Farmer’s Market or who sell their produce to the Inn as part of the local menu, in addition to growing for their own consumption and to stock their root cellars for the winter.

In addition to traditional root  vegetables (carrots, turnip, potatoes, beets) some local residents are trying their hands at more unusual crops.  Local farmer Winston Osmond grew hundreds of bulbs of garlic this year and also raises quail as well as other fowl. He pickles quail eggs and sells them by the bottle. 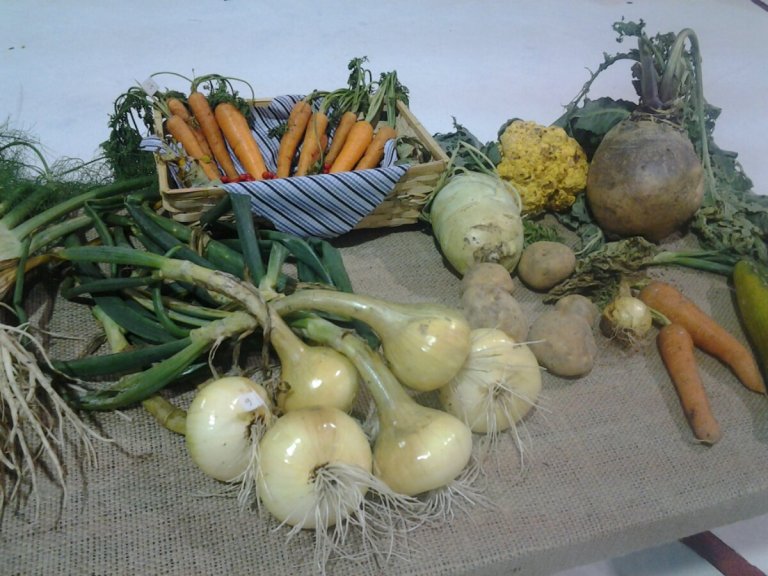 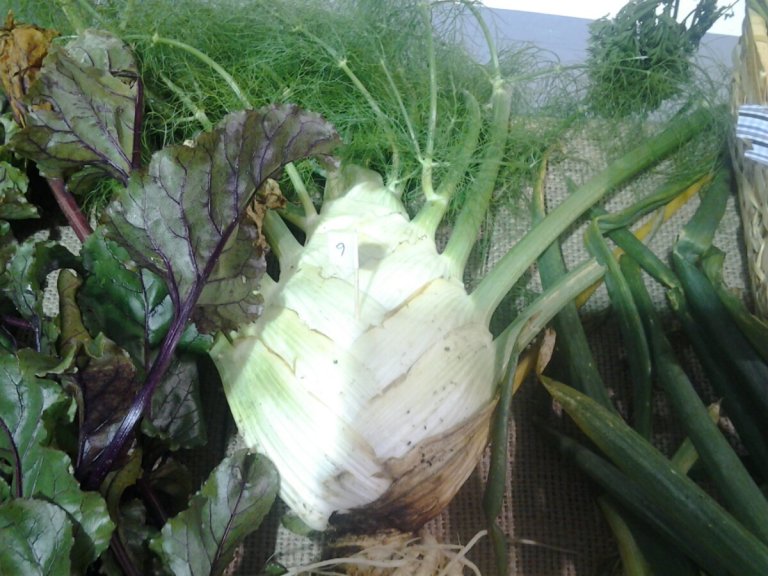 Held at the stadium, there is local entertainment, events for children, a concert on Saturday night and craft displays and competitions. Hours must have been spent to decorate the stadium and booths and tables. Harvest themed throughout, there was even a photo background for families to take their own pictures.

I started my visit with a walk about.

Familiar artists, Adam Young and Winston Osmond, both residents of Shoal Bay had prints and original paintings for sale. Adam was actually painting on site. Both specialize in their own interpretation of Newfoundland scenes.

In addition to his painting, Winston does a number of crafts and his wife Linda featured his miniature Salt Box houses, stages and outhouses on her table. Great Christmas ornaments, a few of these followed me home.

Linda Osmond is a talented quilter but also makes great pickles and relish. I was sleeping under one of her quilts in Room 25 and the Inn also served me a great lamb burger that I suspect might have had her Million Dollar Relish on it. If it wasn’t hers, they did a great imitation! I actually ordered relish by the case this year and her ingredients come mostly from their gardens.

I finally got to meet the lovely M’Liz Keefe . We’d crossed paths once at the Inn in June but hadn’t actually met. She was here as an Artist In Residence with the Tilting Recreation and Cultural Society Artist program. M’Liz lived and painted in the Jennifer Keefe studio for three months in Tilting before returning to Jamaica Plains, Mass. After a few months home, she is now back on Fogo Island and painting again in Tilting.

Numerous booths featured baking, preserves, crafts and homemade candies and chocolates. One lady, Laura Wells, had hundreds of bottles of preserves for sale. Marshberry, partridgeberry, squash berry, blueberry, it went on and on. Jams and jellies and on some tables, I’m not sure if it was hers, there were bottled meats such as seal and moose.

The bottling of meats, berries, soups, fish and just about anything is still a popular tradition for many Newfoundlanders. In the fall, bottling soup when the vegetables and meats were fresh made for quick meals later on.

There was a booth with a caricaturist (from ‘off the Island’) who was doing great quick drawings. A couple of local “clowns” stopped by for a portrait. We caught a bit of the show before we left. They were a great hit with the audience. 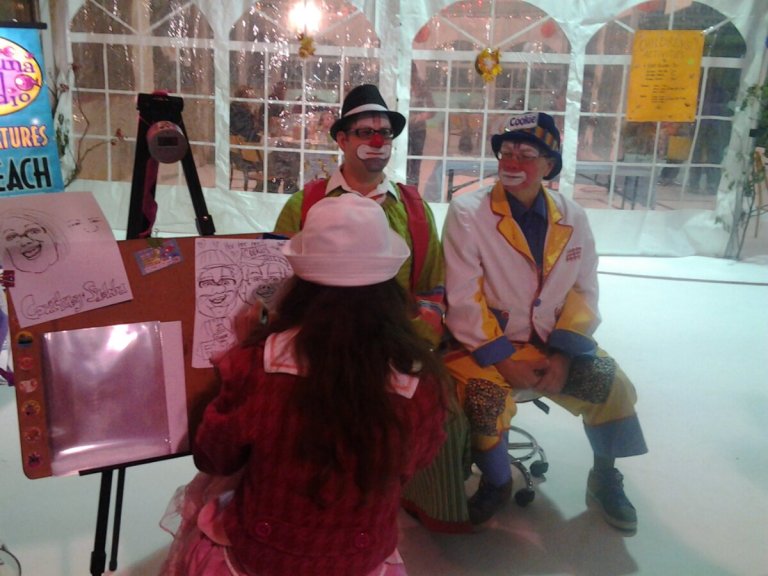 A large area of the festival was devoted to activities for children. Drawing and crafts were in a tent but the preferred activity was the boat building tables. For $2, a child was helped to hammer and nail blocks together, add masts and then got to paint their own boat. I asked a grandmother if I could take pictures of two girls very intent on their boats. Maybe these will be the punt builders of Fogo Island’s future or maybe they’ll design ferries and ships.

Who knows how such an activity can inspire a future? 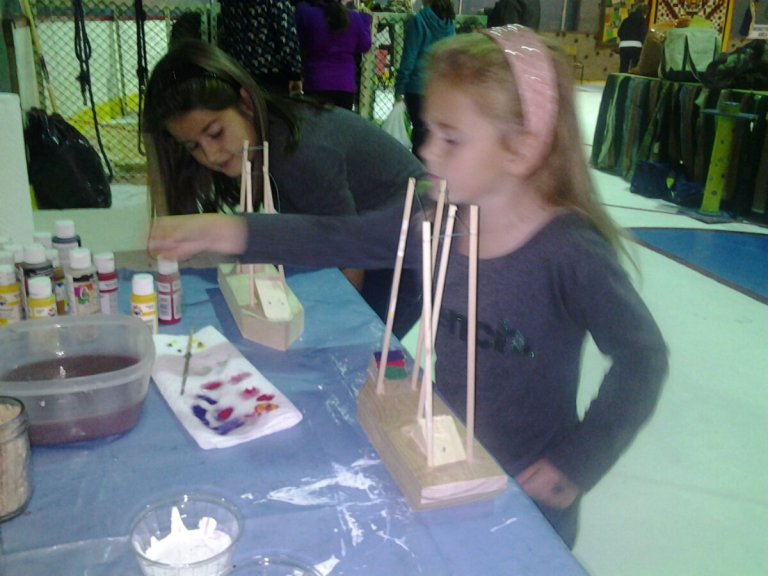 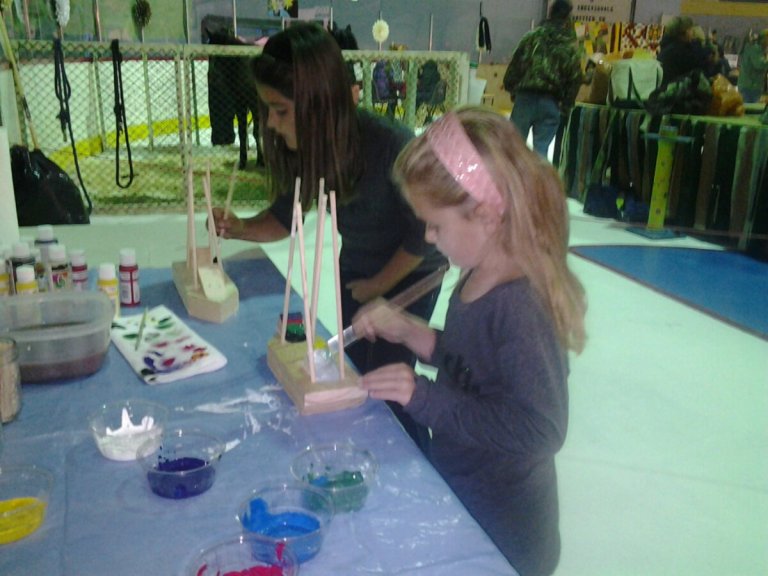 Heritage was represented in music, crafts and food. It was also represented on four legs. There were Newfoundland Ponies from Change Islands and Make and Break, the Newfoundland dog greeters from the Fogo Island Inn, were also visiting the stadium. 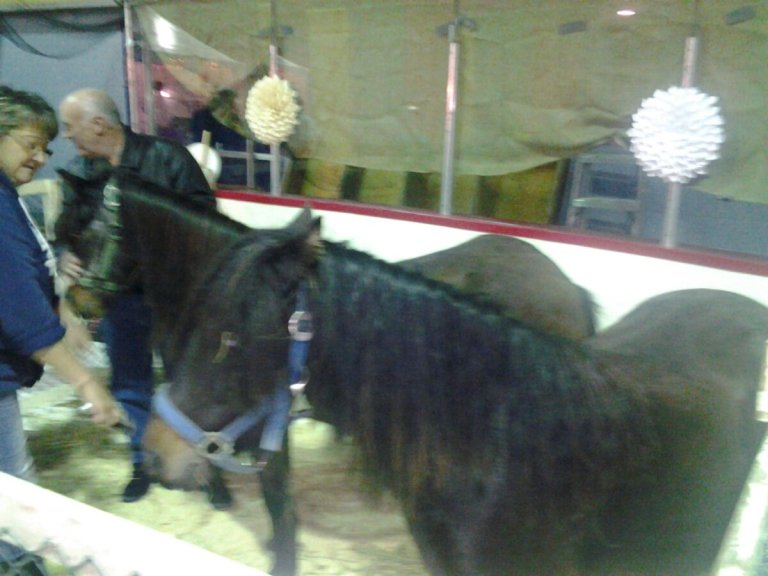 We met several people from Gander at the Festival. Many out to Fogo Island for the first time. Some with Fogo Island roots, others visiting friends for the weekend.

In addition to booths where items could be purchased, one area was for competitors participating in a craft contest with items that were sewn, constructed, carved and hooked, among other methods. Again, I’m not sure if these were all competing against each other but I suspect there were a variety of categories as there were certainly a number of skills being shown. 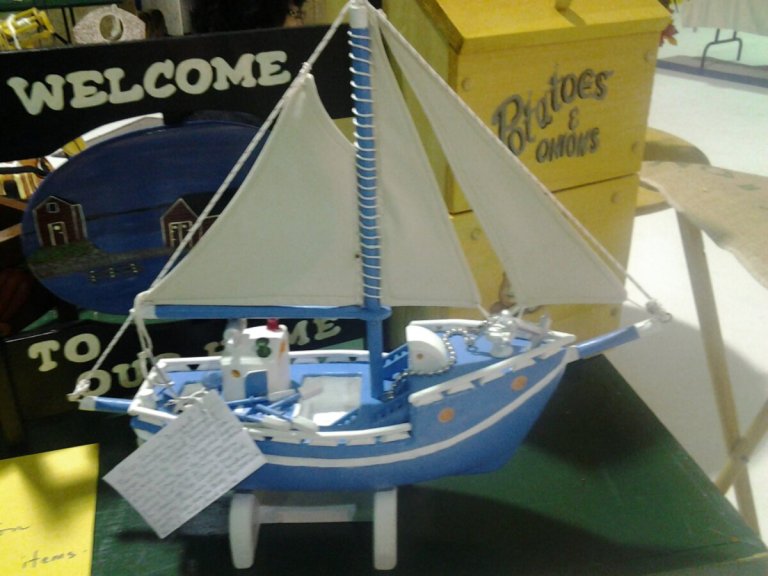 We didn’t catch the concert or the performance by the Fogo Island Outport Square Dancers but will definitely make plans around those events next year. I love watching the dancers with their traditional sets and accordion player. Here’s a taste from a past festival, the Brimstone Head festival, held in the community of Fogo,  thanks to YouTube.

A sitting area and tables and chairs provided places to visit or enjoy some of the food being served by local businesses. One could easily have spent the day, especially if they were from the area and wanted to see everyone and get all the news. 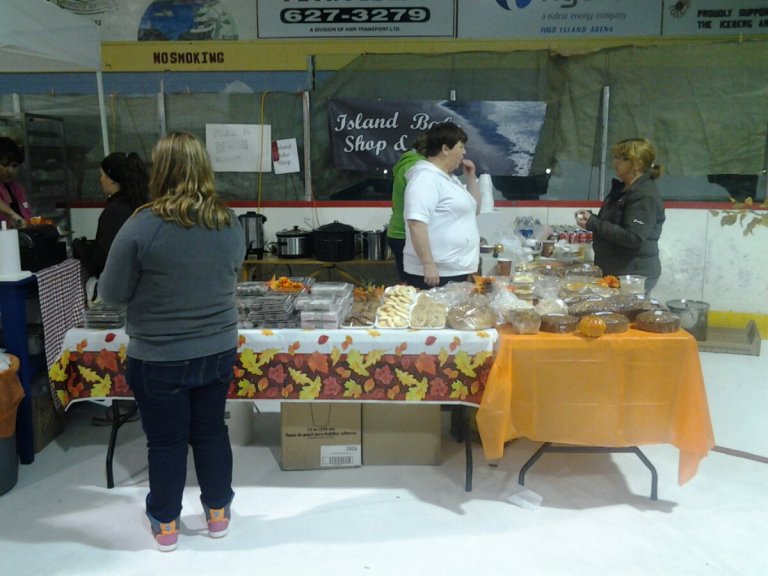 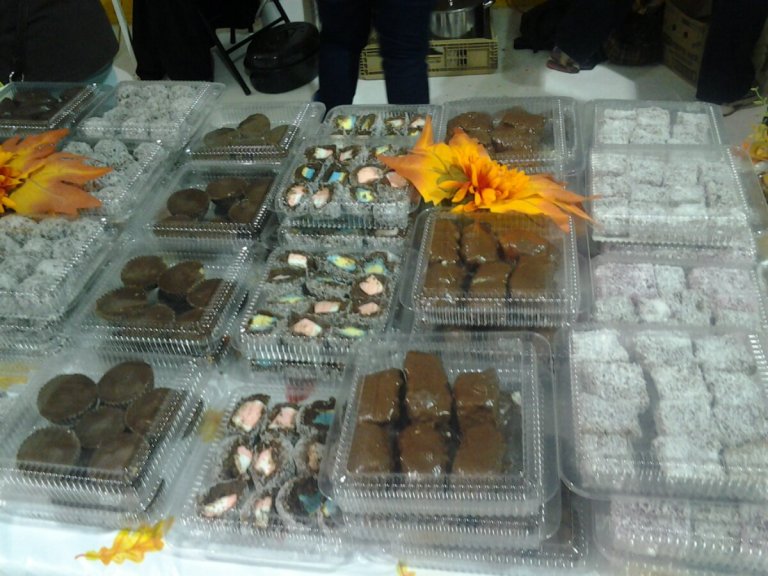 A visitor commented on how happy everyone was and that was certainly true. There are festivals or ‘days’ (Stag Harbour Day, for example) in each community on Fogo Island but this is definitely an Island-wide festival and draws families and visitors to the center of the Island.

Many other festivals are held during the summer/fishing season and due to the dependency on seasonal work, many people can not attend. You don’t get ‘holidays’ when you are a seasonal worker. You get laid off or lose pay. You work every day you can because you don’t know when work will end or start again. In this fall season, most workers are off and after a pretty good year, things seemed festive. 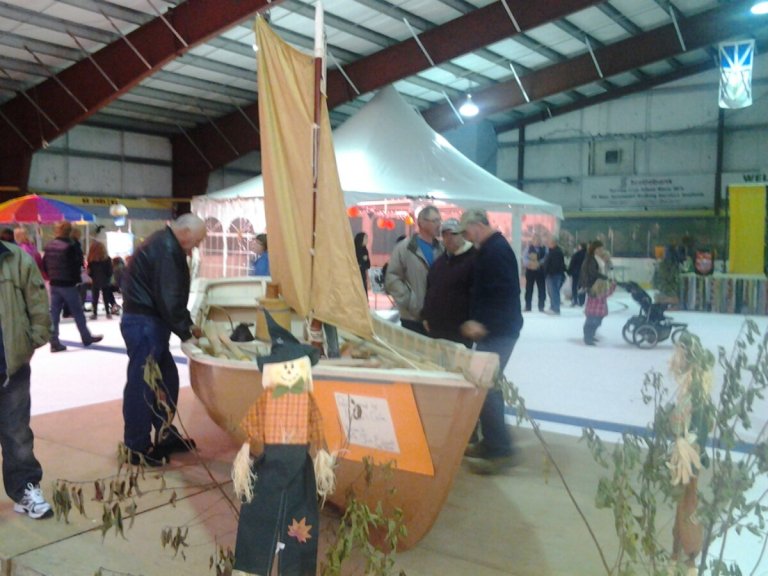 People were admiring the crafts and produce and proud of family members represented in various capacities. There were many three generation family groups visiting the festival while we were there.

When I asked if I could take their pictures, Donna Rowe made sure to tell me Germaine was her daughter in their booth of food and handicrafts. In the corner of the table you can see a CD for sale by Kyra Morgan, third generation represented in this booth. Food, crafting and accordion music! A very talented family. 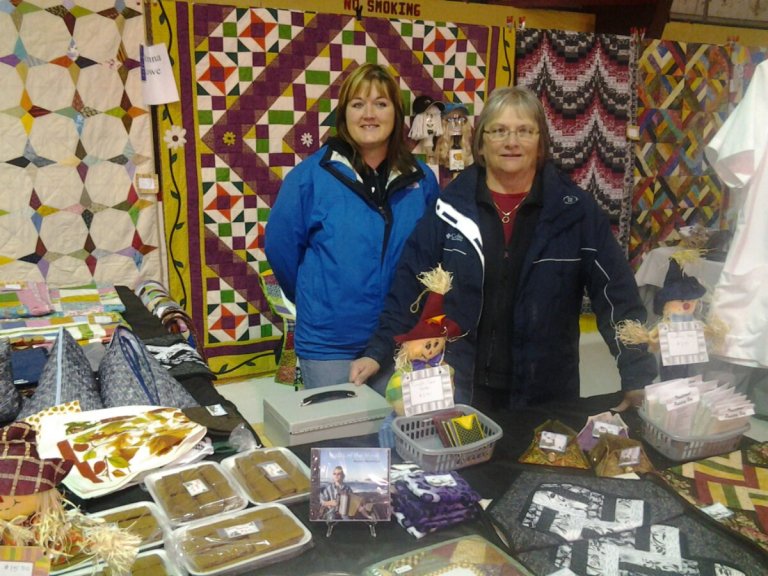 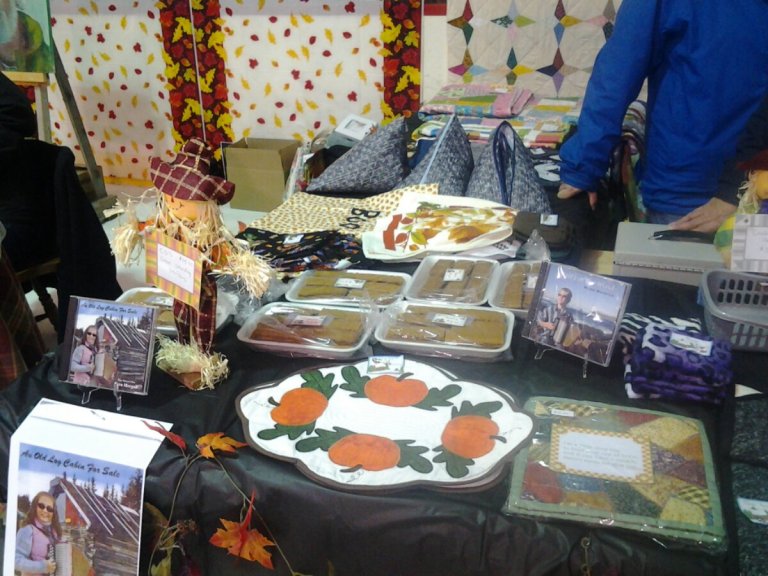 We had to leave to get a ride from the Iceberg Arena to get back to our dinner at the Fogo Island Inn. As part of the special Chef’s weekend, Chef Michelle LeBlanc of Chinched Bistro was presenting her interpretation on Fogo Island inspired desserts as our seventh and final course for dinner tonight.

In addition to the Crowberry compote on her cheesecake, the juniper and coconut cupcake and the pumpkin bread pudding, partridgeberry ice cream was one of the delicious features. 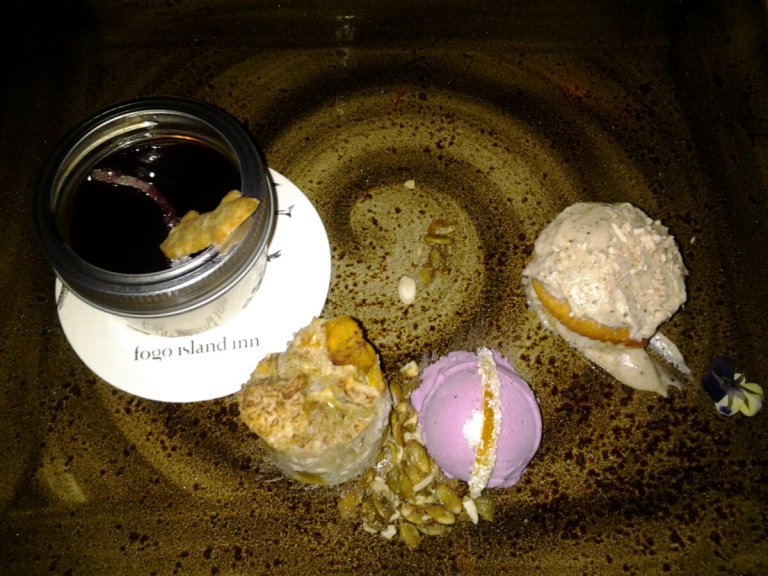 The dining room of Fogo Island Inn just won a third position in an across Canada restaurant contest sponsored by Air Canada’s Enroute Magazine (Nov 2013). Featuring local berries, mushrooms and produce bought from local growers, the menu is high-end but based on the traditional staples and a dependency on the land and sea to provide.

Homage to the traditional partridgeberry tart, Chef Murray McDonald features a deconstructed Partridgeberry Non-Tart. With all the amazingness of molasses, gingerbread and partridgeberry sorbet and sauce, this is an amazing substitute…..

for when Nan is out of  berries.

To avoid disappointment, make accommodation plans early! If the Fogo Island Inn is not your flavour, Oasis by the Sea had a lovely waterfront house in Stag Harbour  and Penney’s Vacation Home in Little Seldom have a house and two new efficiency units. Both houses are traditional salt box houses, about a century old, give or take. Oasis is outfitted with new appliances and modern furniture, while Penney’s house has the wood range still in place in addition to the modern conveniences. Both were welcoming and provide sleeping for a family or couples travelling together.

*Special thanks to the guest editors who found some mistakes mistakes. You know who you are….